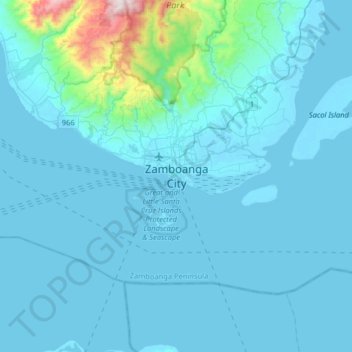 The overall topography of the city could be described as rolling to very steep. There are some flat lands, mostly narrow strips along the east coast. The urban center is mostly flat with a gentle slope to the interior, ranging from 0 to 3%. The highest registered elevation is 1,200 metres. In terms of slope, a large portion of Zamboanga City, about 38,000 hectares, have slopes ranging from 18 to 30%. Another 26,000 hectares have been described as having slopes of less than 3% while about 37% of the area or a total of 52,000 hectares have slopes ranging from 30% to more than 50%.