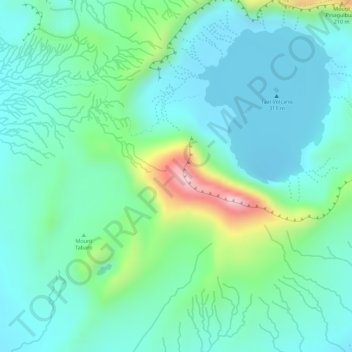 Volcano Island sank from 1 to 3 m (3 to 10 ft) as a result of the eruption. It was also found that the southern shore of Lake Taal sank in elevation from the eruption. No evidences of lava could be discovered anywhere, nor have geologists been able to trace any visible records of a lava flow having occurred at any time on the volcano back then. Another peculiarity of the geologic aspects of Taal is the fact that no sulphur has been found on the volcano. The yellow deposits and encrustations noticeable in the crater and its vicinity are iron salts, according to chemical analysis. A slight smell of sulfur was perceptible at the volcano, which came from the gases that escaped from the crater.